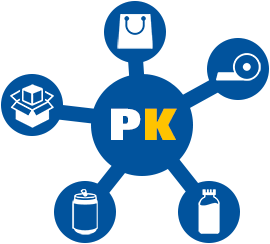 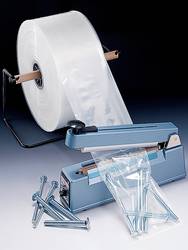 'Poly-tubing' is a flexible, continuous roll of polythene sleeving open at one end and rolled up at other; either on plastic or cardboard core. Economical and easiest way to package or enclose objects of same width but various lengths. Ideal for packaging odd shaped or long items. Simply insert your product into the tubing, cut to required length and heat seal, staple or tape one or both ends. It is also known as 'Layflat tubing'. Usually rolled up to 12" in diameter on a 3" wide core.

'Sheeting' - When Polytubing is slit it is known as 'Sheeting'. There are variety of Sheeting available on the market today, depending the way they cut and wounded. Examples of these are Single wound sheeting, Double wound sheeting, Centrefold sheeting, J-fold sheeting and Centerslit sheeting. Sheeting provides economical protection from dirt, dust and moisture.

How it is made?

Most Polytubing and Sheeting are made from polyethylene; mostly from Low density polythene, which is made from crude oil and natural gas, non-renewable resources. The most common way to produce 'Polytubing' is by blown film extrusion, also called the 'tubular film process'.

In Blown film production process - polythene melt is extruded through an annular slit die, usually vertically, to form a thin walled tube. Air is introduced via a hole in the centre of the die to blow up the tube like a balloon. into the tube causing it to expand and form a bubble. Mounted on top of the die, a high-speed air ring blows onto the hot film to cool it. The tube of film then continues upwards, continually cooling, until it passes through nip rolls where the tube is flattened to create what is known as a ' lay-flat' tube of film. This lay-flat or collapsed tube is then taken back down the extrusion ' tower' via more rollers. The lay-flat film is then either kept as such or the edges of the lay-flat are slit off to produce two flat film sheeting and wound up onto reels. If kept as lay-flat is known as 'layflat tubing' or 'Polytubing'

Food Contact - To use Poly-tubing and Sheeting inside European Union, in contact with food should comply with the relevant legislation on food contact including Great Britain.

Medical use - Similarly, to use Poly-tubing and Sheeting inside European Union, to produce containers for preparations for medico-pharmaceutical purposes should comply with the following regulation:

Options for 'Poly-tubing and Sheeting'

Plain or printed 'Poly-tubing and Sheeting'

Common area of application for 'Poly-tubing and Sheeting'

Unique properties of 'Poly-tubing and Sheeting'

Advantages of Polytubing and Sheeting

Welcome back! Last month I described a method for generating CO2 using a pop-bottle with some yeast and sugar water, this month we'll build a reactor to get the CO2 into your tank water.

This CO2 reactor works by using the impeller of a powerhead to smash the relatively large CO2 bubbles into millions of tiny "bubbletts". These tiny bubbletts must be held underwater long enough to allow them to be completely absorbed by the tank's water. This is accomplished by feeding the output of the powerhead into a cylindrical bottle. Inside the bottle the water swirls around in a cyclone-like manner which causes almost all of the CO2 to be absorbed by the water. The output of the bottle is then sent through some 1/2" tubing down below the substrate and to both ends of the aquarium.

To build this reactor you'll need the following items:

The powerhead can be obtained form your local pet store or favourite mail-order aquarium supplies place. The plastic bottle is the type used as a hamster water bottle. It should be about 4-6cm in diameter, and have straight walls approximately 15cm long. The inside of the mouth of the bottle should be about 1/2" in diameter so the poly tubing will snugly fit inside. The remaining items can be obtained from your local hardware store. Be sure to buy only aquarium-safe silicone.

Using a carpenter's knife or a sharp pair of scissors, cut a 1/2" diameter hole in the wall of the plastic bottle. The hole should be within 1cm of the bottom (i.e. the end without the opening) of the bottle. Use the sandpaper to roughen the bottle's surface around the hole. This will help the glue to stick to the plastic.

With the carpenter's knife cut the end of the 1/2" poly tubing at an acute angle of about 20-30 degrees. Roughen the tubing's surface around this angled cut. Next, cut the tubing to a final length of about 8-10cm.

While the silicone is curing we can plumb the tank. Cut two pieces of poly tubing approximately half the length of your tank. Attach the two pieces with the poly "T", and insert the elbows in to the opposite two ends. Hide this piping under you substrate near the back of the tank. The "T" should be pointing up, and the elbows should be pointing forward and slightly up.

Next cut a piece of tubing to connect the output of the plastic bottle to the "T" connection. The end of the bottle, with the poly tubing glued to it, should be about 2-4cm below the surface of the water when finished (this will be dependant on the type of powerhead you have - since the output of the powerhead needs to be fed into the bottle).

Connect the output of the powerhead to the input pipe of the plastic bottle. Properly mount the powerhead (don't just let it hang from the pipe). Using an elastic, strap the 1/4" output tubing of the CO2 generator to the intake of the powerhead. Mix-up some CO2 brew and you should be up and running as soon as the yeast becomes active.

One final thing which is helpful is to drill a small hole in the top of the cyclone chamber (this is actually the bottom of the bottle - confused yet?). The hole should be plugged with a small plastic screw which can be removed to vent any air out of the bottle - useful initially, and after water changes.

That's it for another month! I hope you have as much fun tinkering with your tank as I do - bye for now...

Poly-house is a zero-energy chamber of polythene sheet (200 gauge) supported on bamboo with sutli and nails, the size of which depends on the requirement and availability of space. The sun rays raise the temperature inside the poly-house by 6-100C through transparent polythene sheet which makes the environment inside poly-house congenial in December and January for growing nursery of solanaceous and cucurbitaceous vegetables for early planting in the open field during first week of February, when chances of frost are over. By this technology, the harvesting can be advanced by one to one and a half months and farmers can get the bonus price by catching the early market in spring-summer season.